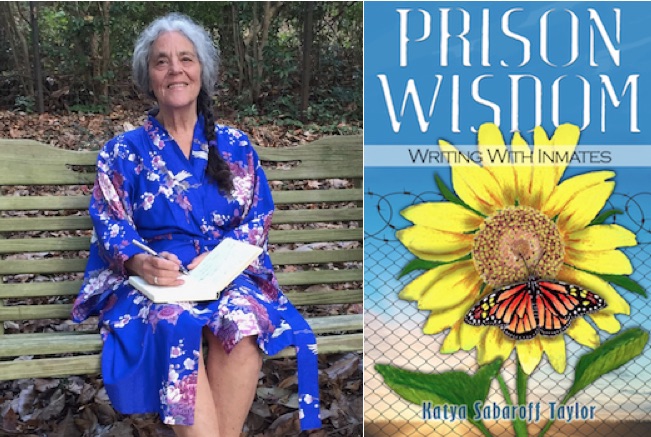 Thorne Dreyer's guest on Rag Radio is Katya Sabaroff Taylor, editor of Prison Wisdom: Writing with Inmates, an impressive collection of writing by prisoners she taught, with some writing of her own mixed in.

Thorne Dreyer and Nina Sabaroff, then a radical journalist, were colleagues at Liberation News Service (LNS) in New York City in 1968. Then, as Jonah Raskin -- who also was an LNS contributor -- writes at The Rag Blog:

Fast forward several decades to a less rambunctious time when she changed her name to Katya... "Nina was the raving radical," she explained to me.... "Katya was the healer." Indeed, as Katya, she became a massage therapist, a yoga instructor, and then a longtime writing teacher who gave workshops in prisons and helped inmates express themselves in words and in images.

Several hundred poems, stories, sketches, and drawings by prisoners are now showcased in Prison Wisdom: Writing with Inmates, a jam-packed volume... that's edited by the ex-LNSer who now calls herself Katya Sabaroff Taylor....

Here's how Katya sums up her life's journey:

Katya (Nina Sabaroff) grew up in San Francisco, and attended Antioch College where she majored in literature. Enrolling at Columbia University, she then earned her Masters in Education. She intended to teach English in high school, but during the "revolutionary" late sixties, was drawn instead to work as a radical journalist with Liberation News Service, in New York City. She later moved to Oregon and worked at a free women's health clinic, and began teaching Women's Studies at Portland Community College.

At the age of 32, she changed her name to Katya, moved to Virginia, and switched gears away from her 24/7 radical crusader life to become a healer. She studied massage and yoga, and practiced those healing arts for 30 years, while also offering healing touch, movement, and creative writing workshops and classes under the rubric: Creative Arts and Healing. At the age of 43, she married Tom Taylor and gave birth to her daughter Alana.

In 1990, at the age of 46, she moved with her family to Tallahassee, Florida. A year later, she was invited to offer writing in the local county jail. She continued volunteering in nearby prisons for 25 years, eventually drawing on the material collected in inmate anthologies, as well as pen pal correspondence with prisoners, into her book Prison Wisdom (published 2017 by EWH Press). She is also the author of Journal Adventure Guidebook, My Haiku Life, and The Wheel of Belonging (an anthology of sermons delivered at her local Unitarian Church.)

Besides continuing to offer occasional writing workshops (both in and out of prison), she enjoys writing Haiku poetry, essays, and stories. Her literary papers are stored in an archive at the WEB DuBois Library at UMass/Amherst. Katya is an avid gardener and "beach bummess," visiting St. George Island on the Gulf whenever she needs a getaway.

Probably everyone who reads Prison Wisdom closely will recognize that it's the work of both Nina the radical and Katya the healer, and that after all these years, the woman who joined LNS in 1968 is still a liberator at heart...Rag Radio is produced in the studios of KOOP 91.7-FM, an all-volunteer, cooperatively-run, solar-powered community radio station in Austin, Texas, in association with The Rag Blog and the New Journalism Project, a Texas 501(c)(3) nonprofit. The host and producer of Rag Radio, Thorne Dreyer, is a prominent Austin-based activist and writer who was a pioneer of the ’60s underground press movement. The show’s engineer and co-producer is Tracey Schulz and the staff photographer is Roger Baker. The syndicated show is broadcast (andstreamed) live Fridays, 2-3 p.m. (Central) on KOOP, and is later rebroadcast and streamed on WFTE-FM in Mt. Cobb and Scranton, PA., on Houston Pacifica's KPFT HD-3 90.1, and by KKRN, 88.5-FM in Round Mountain, CA -- and as a featured podcast at Veterans Today.

Uploaded by RagRadio on November 4, 2017